Are you a Competitor or Poser?

poser noun 1: One who attempts to appear to be something they’re not: wannabe 2: A person who is not what he or she pretends to be: impostor Unfortunately, it’s now in vogue to call yourself a competitor, whether it be in bodybuilding, physique, bikini, or whatever other “physique” class the sanctioning bodies currently have or decide to add. It’s not uncommon to see a national qualifying show with 200 to 400 competitors as opposed to 70 to 100 up to 10 years ago. Some

Who you surround yourself with directly affects every outcome in your life. "There's only one proper basis for choosing friends and that is mutuality of values. Most people exercise no discrimination in terms of thought or values in defining any relationship that they might be involved in or about to be involved in, whether it be the choice of a boss, a friend, a lover, associates at work, whatever. That which guides me is my rational self-interest, and the only reasonable wa

Some use the names Stiff legged deadlift (SLDL) and Romanian deadlift (RDL) interchangeably, which is a mistake because the two exercises are very different. However, both exercises do target the same muscles which are the glutes, hamstrings and low back, commonly called the posterior chain. One of the primary differences between the RDL and the SLDL is that the RDL works the spinal erectors statically, because there is no movement in the spine during the exercise. In contr

A fatty acid is a molecule that is made up of a chain of carbon atoms. These chains can vary in length from 1 – 24 carbons. Fatty acids are given their names based on how long the chain is and at what position the “unsaturation” occurs. If the fatty acid is saturated then the carbon chain length determines the name. What is a saturated fat? Each carbon atom in the fatty acid chain has room for two hydrogen molecules, except at the end where it has room for three. A fatty

Were 1990's Bodybuilders better than Today's?

Were bodybuilders better in the 90’s than they are now? In order to answer this question, we must first define some of the common terms used to describe bodybuilders, e.g., symmetry and proportion. Symmetry is probably the most misused word describing a bodybuilder’s physique. Many people mistakenly use it interchangeably with proportion, which is a pet peeve of mine. Because symmetry and proportion are frequently used together, their true meanings have been skewed. And quit

Six time Mr. Olympia Dorian Yates, "The Shadow", changed the path of professional bodybuilding in the mid 1990’s by bringing outrageous size and proportion along with superb conditioning. He earned the nickname, The Shadow, because he would go long periods of time out of the public eye, e.g., turning down interviews and public appearances, only to show up out of nowhere to compete in major bodybuilding contests. Competing and winning his last Mr. Olympia in 1997, most believ

You will, or You Won't

The Law of Cause and Effect

"Thoughts are causes and conditions are effects. Your thoughts are the primary conditions of your life. Everything you are or ever will be, will be a result of the way you think. If you change the quality of your thinking, you change the quality of your life. The change in your outer experience, will follow the change in your inner experience. You reap what you sow." Brian Tracy – Maximum Achievement

Did you know, along with anything having to do with weight training, the warm-up is highly debated. Although everyone has individual needs and responds in different ways there are universal training principles that correspond to physiological truths that are necessary for safe, rapid gains. Warming up before training intensely is one of those principles. There are many ways in which one can effectively warm-up, and each person needs to find out what works best for them. Ke

Did you know that despite its popularity and efficacy, most people perform the squat incorrectly? They do not seek proper instruction, or if they do, it’s from the local gym rat that calls himself a coach, who’s never sought instruction himself. The barbell squat is one of the most frequently prescribed, as well as used, exercises for many good reasons. Not only is it a supreme exercise for strength and hypertrophy for powerlifting and physique competitors, Its bio-mechanica
1
2

Vegetarians, Mind your own Business 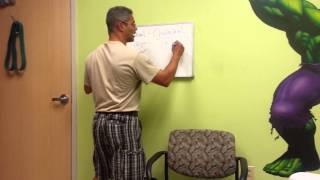 Vegetarians, Mind your own Business